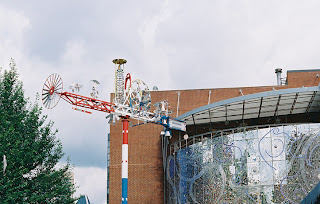 On October 9th I visited Baltimore’s American Visionary Art Museum and the exhibit THE ART OF STORYTELLING: Lies, Enchantment, Humor & Truth: http://www.avam.org/exhibitions/art-of-storytelling.shtml This museum was an exhilarating treat.  I felt like I stepped into a crazy place where art is ecstasy, art is everywhere, and art is life, and the academe and critics are no where in sight.  The sense of freedom and/or compulsion to create with whatever the creators had on hand was inspiring.  And the variety of media and techniques took art out of any ivory tower and brought art’s power and delight to the masses.  There was more to see there than I can write in a short piece.  So I am not going to discuss any of the permanent collection, and instead discuss the highlights of the exhibit.


There were 5 of Béatrice Coron’s delicate silhouette tyvek cutouts.  I always enjoy the intricate story telling within her work.  But my favorite there was The Web of Time, constructed within the framework of a spider web.  Within the web a human a skeleton figure was depicted engaged in activities representing various stages of life.  It seemed to say we are all connected, but we are also bound by the mundane in life and constraints of time.

There were two of Larry Yust’s photographic elevations: Salvation Mountain  and Salvation Mountain and Surroundings.  In his photographic elevations he combines 10 to 100 digital images to create panoramic views.  Here is a link to see some of his work.  I especially like how some of his building panorama string out structures, and each one has a complete frontal perspectiove.  http://www.whatinternational.com/photos/graffiti.html

Debbie and Mike Schramer had two very large Fairy Tree House constructions that were very organic and fanciful.  They made me think of my Tree House in a way.

Chris Roberts-Antieau's had several embroidered fabric appliqués that told humorous and human tales, like The Cycle of Kitties, that started from picking out a kitten to burying a beloved feline friend, and round and round again.

Esther Krinitz told the story of her Holocaust survival in a 36-piece embroidered ensemble.

Gretchen Feldman had an entire gallery room devoted to her intense watercolors.  Most of her watercolors were landscapes of pure line and color.  But there also was a cancer series (she has since passed away from cancer), where she depicted the disease inside her body.  I particularly liked the Cellular Slime Mold, where the cancer cells seemed almost to be dancing.

But my favorite was Mars Tokyo's miniature 3-D Theaters of the 13th Dimension (Mars Tokyo is the nom des artes for Sally Mericle, who resides in Baltimore.)  Her Theaters were housed in a large wooden black circular cabinet, with small doors with glass knobs all along the top of the cabinet, approximately 5 feet up.  On top of the cabinet was a tissue paper onion dome illuminated from within.  All the doors of the cabinet were open, and within each door sat a small hose that held an entitled world, like The Smoker.  In this world upright cigarettes formed the pillars on either side of the room that receded to a large red Lucky Stripe circular logo on he back wall.  And within the middle of this room sat a man smoking, the rest of the room full of gauzy smoke.  The roof of every small house had most of the roof cut away and replaced with parchment so light from the onion dome above could illuminate the little worlds.  To see some of these worlds go to http://teenytheaters.com/ and click on “The Collection”.

There is also an outdoor sculpture collection and sculpture garden.  I just had to post some outdoor photos from the museum.  And I can’t wait to go back! 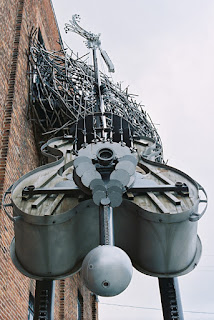 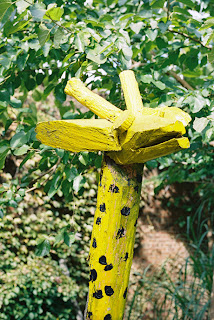