I liked my torn and reassembled images, so I thought I'd try to make some more and create a series.  Since my fire images were taken as a series they were the easiest images for me to assemble in a series.  I made a total of six, and made bases for them out of oak so they could be free standing.  Here is my series; first in two groups of three, and then all together. 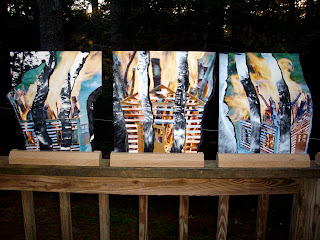 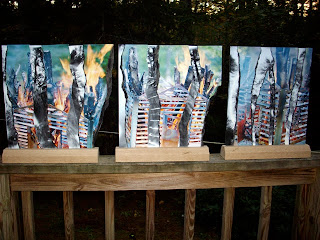 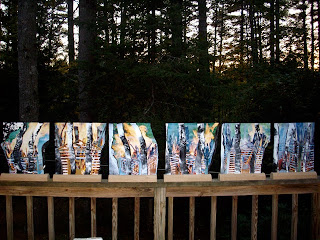 So then I thought I might try to build a skeleton house.  I wanted to see what it would look like if I built a skeletal structural series to stand in front of my fire series.  I cut it out of copper (which is way too shiny as it's hot off the cutting board), but I'm not sure that I like how it mirrors the copper house in the photos.  I think I will try constructing my skeletal structures with other materials, and not make them look so neat and uniform.  But at least it gave me some ideas.  Here it is in front of two of my fire re-pieced images. 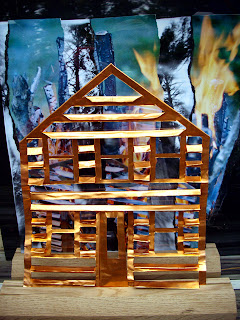 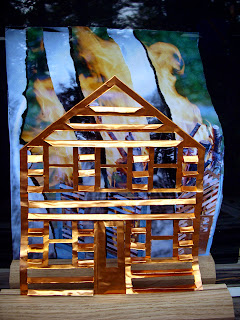 Judy had mentioned trying out transparencies.  I got a couple sizes of transparency film that I could play around with.  Since my pinhole images are made with paper negatives, I thought I should edit them in Photoshop and remove some white (or black, or whatever) from my images to have true transparent space in my film prints.  I made six, of different subjects (to make the best experiment), and then suspended them in front of my six fire assemblages. 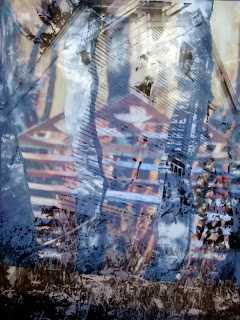 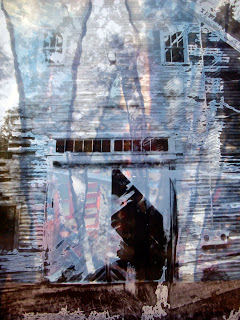 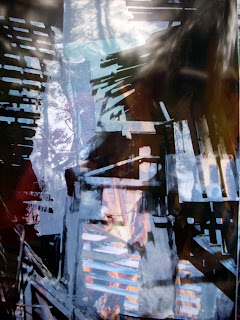 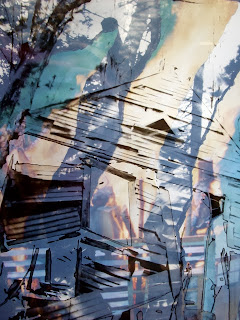 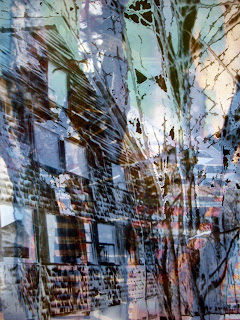 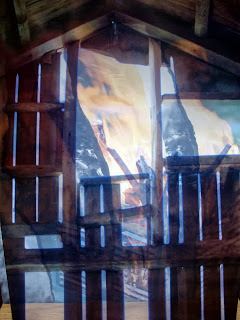 So this was interesting.  Today I took some film photographs of my transparencies and fire assemblages.  Through the viewfinder they looked very interesting, so I'll be curious to see how they turn out.  I also resized and reprinted my transparencies today to 11" X 14".  I have some 11" X 14" plexiglass sandwiches I made for another project a few years ago, and I thought it would be interesting to see how they worked in relation to each other, and other things, as well as space.
Posted by Unknown at 2:39 PM