Jesseca suggested collecting things from the abandoned places I've been photographing.  After looking at Beverly Buchanan's Shack Works I got the idea of gathering material and constructing sculptures that make me think of the place.  This Broken Barn is my first attempt.  All the parts, except supporting frame & fastening (for construction integrity reason) have literally been cast off from the barn.  It's not complete yet; needs a proper base and details, but the idea is there. 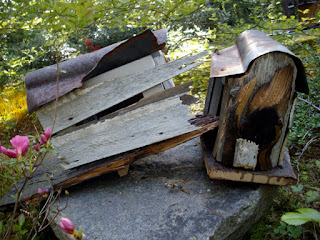 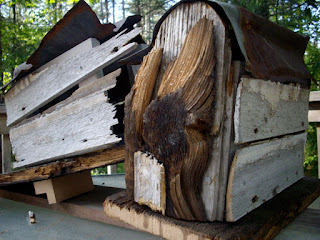 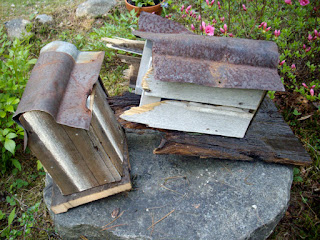 I have also learned some interesting facts about this farmstead's history.  The original settler on the site was twenty-two year old William Deering in 1770.  William was born in Scarborough, Maine.  He was raised primarily by his Indian fighter maternal grandfather, Charles Pine, after his parents died.  William left Scarborough for logging, cutting trees for the King's masts.  William built himself a puncheon bark structure that he lived in for three years while he cleared land at the farmstead.  Eventually neighbors helped him build a log cabin, on the site of the current farmstead structures, and in 1778 he married Sarah Rumery of Biddeford, Maine.
It was William and Sarah's grandson, Isaac Newton Deering, born 1831, who built the structures I have been photographing  The old cabin was a joiner shop.  The shingled barn next to it was a carriage house, with storage for lumber on the second floor, and a blacksmith's shop in the back.  The large, now broken, barn stored corn in the second story and stabled horses in the long attached section where the roof is peeling away.  Isaac married Elmira Guptill of Limerick, Maine, in 1856, and they had seven children together, three boys and four girls.  Elmira taught children in a one room school house not far from the farm.  The golden years of the farmstead were during Isaac's industrious lifetime.  Isaac passed away in 1895.
Isaac's fourth child, Abraham Lincoln Deering, took over the farm.  A. Lincoln sold milk to H. P. Hood, and harvested, stored, and sold ice.  He built a sawmill, and during World War I sold lumber for the construction of ships.  A. Lincoln's wife, Mary, also taught school in the one room schoolhouse, and they had two sons, Noel and Roger.  A. Lincoln was quite prosperous and became very wealthy.  The farm came to be called the Deering Royal Oaks Farm, because of it's history of selling lumber to the crown.  But the farm began to fail in 1930 when A. Lincoln's health began to fail.  He died four years later.
A. Lincoln's son, Noel, became a lawyer, and moved to Boston.  His son Roger, who became an artist, stayed on the farm with his mother Mary until about 1940.  They were not successful farmers.  They had to keep selling off livestock to keep things running, and eventually they gave up farming and Mary and Roger moved to Portland.  They would return to the farmstead for the summer months until sometime in the mid-forties.  Here is where the written history ends, and my conjecture begins.
Obviously, I have been spending a lot of time at the Deering Royal Oaks Farm, poking into places and scavenging pieces.  The boarded up house has boards loose in the back now, and I have discovered, much to my surprise, that the structure is gutted.  It's a testament to its original construction that is still is standing.  Also, there are burnt timbers falling off from the end of the barn closest to the house.  I have wondered how and when this barn obviously burned.  And I wondered what happened to the house.  But I think this is also why I was never attracted to photographing the house, for its guts, or heart, are gone.
What I believe happened to this farmstead was the great fires of 1947.  That year there were many historical fires all over the state of Maine.  But the fire I am concerned about started in Newfield, Maine, on October 17, 1947.  For 180 days there had been no rainfall in Maine.  This fire spread and raged until finally extinguished on October 25th  Ninety percent of the towns of Shapleigh and Waterboro (where the Deering farm is) burned, a total of 20,00 acres.  I think the fires hit some of the farmstead structures, gutted the house, burned a portion of the barn, and ended the summer stays of Mary and Roger.  But I have not verified this.
Roger Deering went on to be a successful landscape painter.  He moved to Ocean Avenue in Kennebunkport.   From 1945-1975 he was director of the Roger Deering Art Gallery and the School of Outdoor Painting in Kennebunkport Maine.  Roger Deering passed away in 1980.