Jesseca agreed with Ben that I had been scratching at the surface of things.  But she also said I haven't just been scratching, I've been digging.  She said one part of me has been writing another part of me a letter, and by going back continually to the same place I've been forced to uncover the letter's meaning.  Last time I met with her she suggested me researching the family histories of the places I've been photographing.  Yesterday she said that was no longer necessary, because the history I've been researching is my own.  She said it's interesting that I am  looking at the fact that my family is broken, but I am also in a way fixing it.  She said in family situations we don't really have individual control, but in art we do.  She said I have been using art as a transformative method,  and I've been transforming myself as well.
Jesseca said my pinhole images were really getting strong.  Last time I met with her I brought a few large pinhole prints, and she said next time she really wants to see some more images printed large.  She said I have created my own language with pinhole.  I told her that at the last residency, starting with Deb Davidson, I had heard a lot about the different languages spoken by my sculptures and photographs, so I have been thinking a lot about my visual language.  She said that's been a good thing to think about, because she feels I've "been launched".
Jesseca particularly liked my "mistakes", like this one: 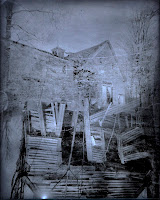 She said I should try to do more images like this on purpose.  I told her that I hadn't developed this one until a week ago, and since then I have been experimenting.  But I usually wait until a have a few dozen negatives before I develop them, so I'll have to wait and see how they turn out.  I said I also liked the accidental scratches on the negative in this image.  I have collected some rusty nails that I've pulled from salvaged siding from the barn and I have thought of purposely scratching the surface of my negatives with these nails.  Jesseca liked that idea.  She said this image in particular is getting at the heart of what I've been thinking about.
Jesseca also loved my copper house and my idea of burning it and documenting it: 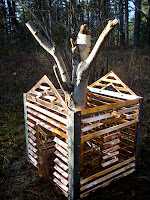 She said it's like 'trial by fire'.  It's funny she said that, because the next thing she said was that I am getting less literal in my sculpture.  She said I have to really think carefully about where I put my copper house when I burn it, so the resulting photographs of the event will mystify the viewer and take them into my world.  She also said I have to videotape the burning as well.  This sculpture is just        12 1/2" X 12 1/2" square by 16" tall, but Jesseca said she would love to see it really large, like a public work or something.  (Oh, and I saw Shellburne Thurber afterwards, and she told me she was very happy to see I had paid close attention to all my construction details in this sculpture, unlike my sculptures last fall.  I told her that her voice was in my head while I was constructing it, and I tried to slow down and make a proper finished product.)
Jesseca said I need to think about how I'm going to present my work at the June residency.  She said I need to look hard at the juxtapositions, because my work is very much about order and disorder.  She paired these two images: 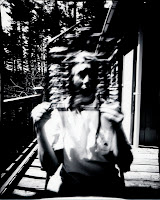 She said I didn't have to keep them together, but she said she it was interesting to look at how they speak to each other.  I never thought of looking at them this way, but it's true that they speak to one another on a few levels.
So now it's back to work.  Like Shellburne said, "Oh, you have plenty of time to experiment before the June residency."  I meet with Jesseca for the last time on June 1st.
Posted by Unknown at 9:09 AM