Jesseca said my photographic imagery was improving, becoming less literal, the framing more interesting, and the imagery more evocative.  She liked the different voices of film, pinhole film, and paper negative pinhole, and said some of my paper negative pinhole images were really successful.  She said I am very interested in the culture/ nature thing, and also interested in architecture.  She said I am definitely trying to say something that’s very important to me, and I need to dig deeper to find out what that SOMETHING is.  She said that I seem like a very organized detail oriented person, so she thought it was interesting that I seem to be so drawn to these places of disorder and neglect.  She asked if I am trying to rescue these places from oblivion, capture evidence of life lived, bear witness, pay homage’s, unearth their stories, WHAT?  She suggested I look up in the town records of who had owned that old barn, and what transpired to abandon the place to ruinous neglect.  I told her I had already thought I must since I’ve spent so much time there.
She liked the two variations I showed her of my house explosion sculptures.  She liked that I was creating an environment to photograph my sculptures in, and I should do that some more.  She said it helps to bring the viewer deeper into a created world.  She said I had to watch out though for clues that bump the viewer back to the real world.
Of my collages, she said she thought it was great that I was trying new and experimental things, but the pieces in my collages all looked like separate pieces that all spoke different languages.  She pulled out a book on Kiefer and said, “Look at how by his limiting his palette he is able to make all these materials speak harmoniously and cohesively.”  She suggested printing several of the same image and work on all of them at the same time.  She said to try and work in the beginning with just black & white & grayscale (spray paint botanicals if I use them, use white on black, and black on white, etc.), and to think the whole time of a complete image rather than separate parts and pieces.
Posted by Unknown at 2:29 PM No comments:

I thought I might try adding to some of my stranger pinhole images.  I printed some out on 17" x 22" cold press paper and just started experimenting.  This one I drew on with water color pencils and then blended some with water.  I think it's a fun start, but I definitely think I could push it further. 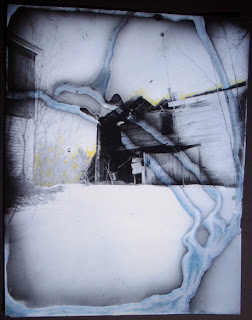 Next I took one of my silhouette images and tore up a silkscreen print from last semester that I felt spoke to how I see this cabin and added it as a layer. 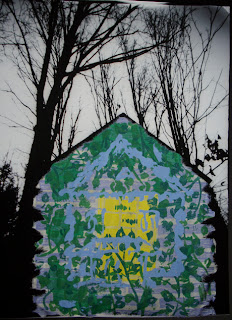 On a silhouette broken barn image I layered multiple torn pieces of the same silkscreen silkscreen to the image because I feel like the barn is being torn apart. 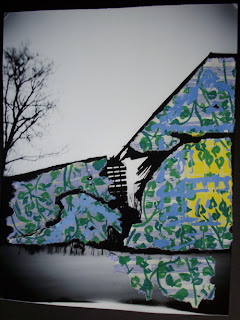 I tried applying dried pressed ferns to the same barn image, because I feel like nature is taking over the old barn.  I printed haphazard planks and added elements to the sky.  It's still not right, but I feel it's closer. 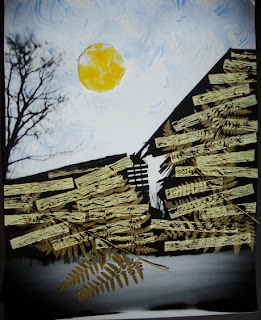 To the cabin I planked the side with birch bark, silkscreened over it, and added color to the sky.  Then I added a number of dried botanicals to creat a tactile three dimensional forest. 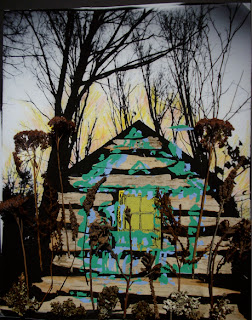 I had printed some of my ice images large as well.  I took rice paper and tore pieces to form layers of 'ice' to layer on top of my photographs.  I watercolored the undersides of these paper pieces so the color would bleed through, but be mor muted and the brush strokes less distinct. 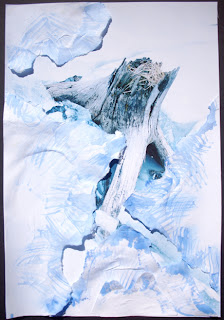 On this image I applied dead leaves, and tucked dried grass and pine needles under the paper
'ice sheets'. 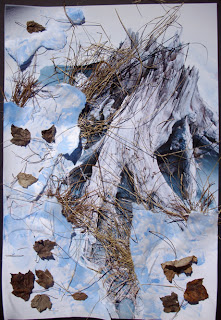 On this image I applied all manner of things; moss and parts of pinecones to the stump, curling twigs coming from the stump, and leaves on the ice. 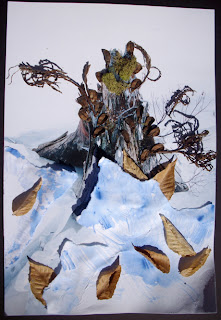 All of these projects been a fun investigation that I hope opens another door for me, even if I don't think I've created any one completely successful image.  So I think I'll try some more.

I have been trying to find a way to get a good image of this sculpture.  I got the idea of using a blown up pinhole camera silhouette image of the old cabin as a backdrop.  I was thinking it adds another level to the "hose" conversation.  These are my most successful.  I may try again on a day with more diffused light. 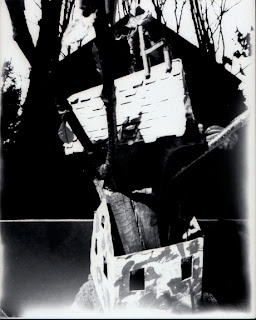 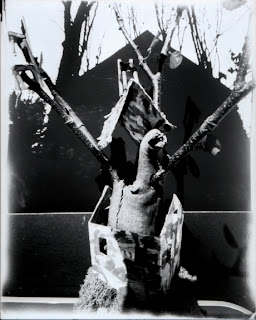 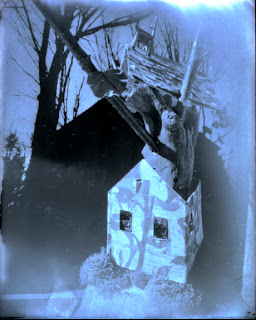 Posted by Unknown at 8:10 AM No comments:

There is always a developing delay with my pinhole images, particularly because I wait until I have a stack of negatives to develop.  The snow is now gone from the barnyard, and a section of the facade has started to open up.  It's as if the walls and metal roofing are turning into wings that pull the structure apart in the wind.  I have started scavenging pieces from the barn to build a little broken-barn sculpture with.  I have scored a particularly wonderful piece from the metal roofing.  It's a good thing my tetanus shot is up to date! 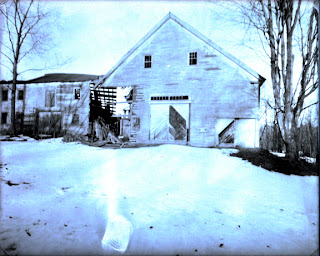 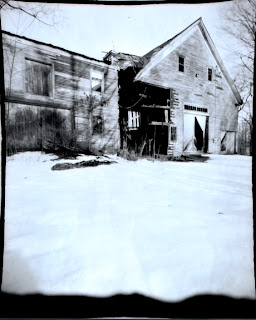 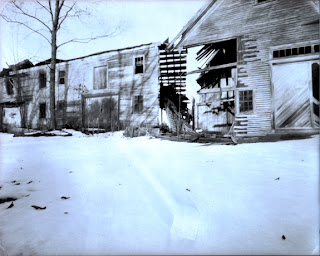 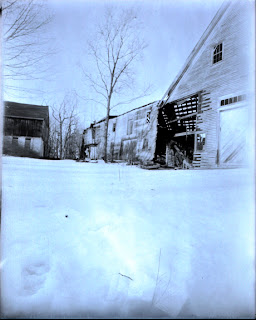 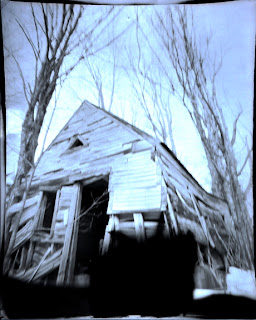 Posted by Unknown at 7:53 AM No comments: